-34 today is a wee bit overly chilly! And the insane amount of snow this weekend was crazy as well. I suppose that there is no doubt now, winter is in fact here! 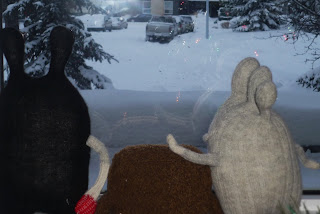 Our kids took advantage of the snowfall, bundled up tight, and set out to make igloos. These 3 stayed in and watched from afar, anticipating the hot chocolate when they all came in. Monsters love hot chocolate.. monsters love everything EXCEPT broccoli, it's a little known fact. Sometimes snowdays can get a little boring, and copious amounts of tv and video games are involved, but this weekend it was all about the lego. Oh, so much awesome lego! 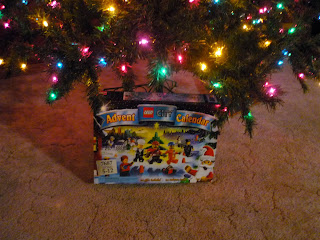 Of course with kids, advent calendars are always involved with Christmas. And although all 4 of them would still love their chocolate a day.. we have been doing a lego advent calendar for a couple of years now. Same idea, each day you get to open up a little door and then build a super awesome little lego man, or sled, ect. Of course we have to take turns, which sucks sometimes (my day is Friday, and Dinnon and Klip get weekends) but we are going to have an awesome little winter set up come Christmas Day! 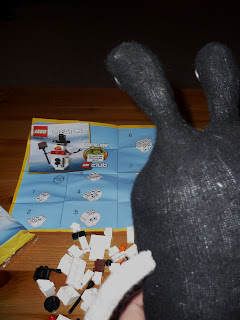 We got a super cool snowman and christmas tree to add to our "Christmas Lego", and Klip was up super early saturday, and set out to build alone. 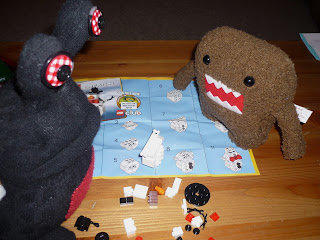 But he needed some assistance from Domo. They soon figured out the directions were upside down, flipped them around, and they were on their way. Domo had to get the snowman's nose on "just right". 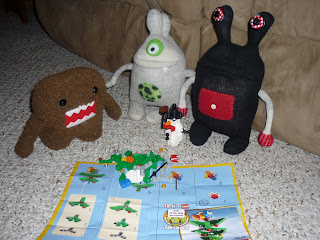 There was a bit of cheering once he was fully intact, and then all 3 then set out to build the tree, with it's twinkling lights and prezzies underneath! 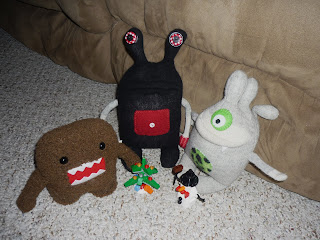 2 really cool lego pieces to add! Yes! They thought about it for a bit, and decided the snowman needed a name, & hummed over a few different ones... And agreed on Carl. Yes, Carl the snowman is for surely awesome with his big red bowtie, and black tophat 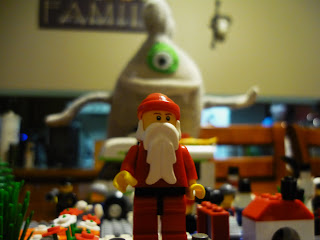 They found Carl and the tree a perfect spot on the platform, which we will reveal more of later on. As well as show you more of our little daily lego creations, some christmas favorites, and traditions. Last year there was NO SANTA in the advent calendar and that was really a bummer, so we set out to track one down on ebay! He even came with an elf :)

This year we wonder if there is going to be a caroler in the box. Dinnon loves the chipmunks, but Klip is much more refined and could sing to Bing Crosby all day.