If any of you have Super Mario Brothers for the Wii, you will be familiar with the title of my post today. Yes, that is where we have been. Stuck in front of the Wii! Santa was good to us, but our favorite was the new Mario and Luigi adventure. Things are going to get difficult when holidays are over and it's back to routine. :-

Dinnon met Mario last winter, and immediately they became friends. They both LOVE spaghetti, so how could they not get along?? 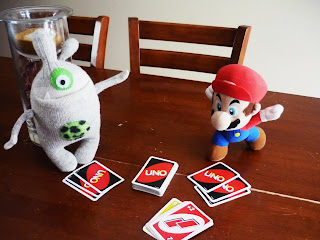 I hope everyone had an awesome Christmas! I am sure plans are in the making for New Years. Monsters love New Years, and they already have their party hats and streamers, ready to ring in a new Decade! They tend to celebrate a little early though, as midnight is pretty late, they were once told if they stayed up too late, they might turn into pumpkins.

I plan on getting some mini monsters couples sewn up soon, to post on my etsy site. I have taken a bit of a sewing break, a reality break really.. and have to get back into the groove of things!

A pretty picture from yesterday with all the frost... so neat! We got so busy with Christmas that we haven't gotten to that snowman yet.. maybe today! 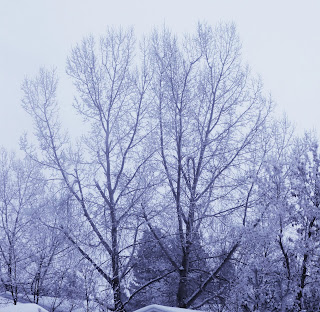 I am looking forward to 2010. We have 2 birthdays in January, Dinnon's, and our daughters. Then the "birthday season" is over. Ahhh.. It's 4 months of birthdays around here, craziness!

Have a great week!