Wow.. a new decade. Seems crazy that 2010 is here already, seems like we just rang in 2009! 2009 was a good year, my first year venturing out into the farmers market world. At first I was leary, which I think is why I never really approached it before, but I had a really good time doing markets (besides the 5 am), I met some awesome people, and I just want to take a minute to thank you for all the support! You are what keeps me sewing! So again, THANKS SO MUCH!

We got together with a few friends to ring in the New Year, and the monsters did the same. Arlo and Eli participated in some fun Cranium games, and there was an abudance of gingerale consumed. 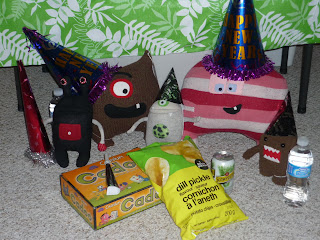 Our New Years Day tradition is fondue. We have done it for about the last 4 years now, and the kids look forward to this every single year. So we set out to cook up some mushrooms, onion, cheese, ect.. and we had a great day. Gets easier as the kids get older, and it sure beats being out in the nasty wind today. Brrr! 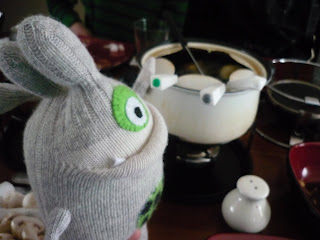 Dinnon was a little confused by this whole process. A little known fact about monsters is they tend to GOBBLE their food, it's a terrible habit. So when he only had 2 little forks to cook with, he was slightly cranky. But, in my opinion.. it's an awesome opportunity to have some great conversation, talk about the last year, and what resolutions we might possibly have for 2010.
In 2010 I hope to venture out more with photography, as well as keep up with my sewing. I look forward to it being another creative year!
Posted by Bonnie at 1:40 PM